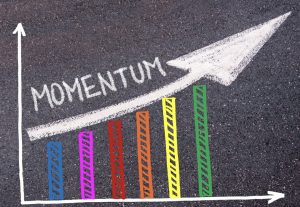 The New York Times article, “In a Battle of Bigs, Kansas’ David McCormack Delivers”, describes this year’s NCAA final men’s basketball game between Kansas and North Carolina.  During the game, we saw an excellent example of momentum in action.  Both teams were ahead for basically the same amount of time.   Both teams had the challenge of keeping momentum going in order to win the game.

Momentum is described as the amount of motion occurring in something that is moving, or the force that drives something forward to keep it moving.  A car moving down a hill is one example of momentum.

Another example of something that can create momentum is encouragement from family or a coach, which can help keep driving you forward and encourage you to continue toward success.  During the first half of the game, North Carolina was ahead. Kansas was behind.  When Kansas entered the locker room at halftime, David McCormack smiled at his teammates.  The teammates thought, we have a 16-point deficit, title on the line, why are you smiling?  Another player, Christian Braun commented : “I was like, why are you smiling, dude? We’re down 16.” McCormack was telling me, “keep your head up, keep going, we’ll be all right. I was like, man, I Don’t know if I’ve ever been here before. Down 16 in a national championship game. I’ve definitely never been there.”

But McCormack backed up his confidence, hitting the two biggest baskets of the game for Kansas and helping them overcome a 16-point first-half deficit to beat North Carolina 72-69 for the national title.  The 16-point deficit was the largest ever overcome to win a championship.

Just like in the game, we experience momentum in our lives.  When things are going well emotionally, socially, financially, and physically and we generally have positive momentum.  It’s easier to make good choices and just keep moving along.

However, when things aren’t going well, that is when it is very difficult to dig in and just keep going. It’s during these times instead of being frustrated or wondering why life isn’t going our way we need to be patient, persevere and keep moving forward on a positive path.  It is this commitment that provides the force that can help us obtain and maintain positive momentum.