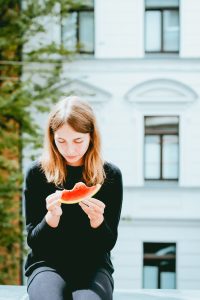 Recently, I had a client who came to see me due to depression and anxiety.  While doing the intake, I realized that this person also had an eating disorder.  Eating disorders often coexist with other mental health issues.  It is important for people to understand that eating disorders need to be taken seriously and can be life threatening.  This client had some of the classic symptoms of anorexia.  She saw herself as very overweight even though in reality she was underweight.  Her self-esteem was very low.  She was abusing laxatives and starving herself.  She also exercised very hard for 2 or 3 hours daily.

People with anorexia restrict their calorie consumption and diet.  They starve themselves and are often malnourished.  They over exercise and use laxatives.  They have a distorted body image and fear of gaining weight.

NIMH indicates that people with anorexia exhibits the following symptoms:

People with bulimia often eat large amounts of food and then purge.  During these episodes, they lack self control and can’t stop eating.  After overeating they vomit, use laxatives, fast and over exercise.  People with bulimia generally maintain a normal weight or are overweight.   People with bulimia fear gaining weight and are unhappy about their body.  They engage in bulimic behaviors secretly because they have feelings of shame around their behavior.  The binge purge cycle ranges from a couple of times a week to several times a day.

NIMH says that people with bulimia may exhibit the following symptoms:

People with binge-eating disorder have loss of control over eating.  They consume large quantities of food.  They don’t purge after eating.  They are generally overweight or obese.  They are at risk for developing health issues such as heart problems or high blood pressure.  They have guilt and shame about their lack of control surrounding eating.

Previous Post
Today we can communicate with others more easily, but we don’t confide in others.
Next Post
Acronym HALT Teaches Self-Care Skills